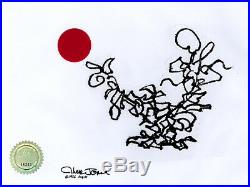 THE DOT AND THE LINE. 1965 Academy Award Winning Short by. Chuck Jones and MGM/Visual Arts. With Linda Jones Seal and COA. "The Dot and the Line" A Romance in Lower Mathematics was a book written and illustrated by Norton Juster and released in 1993.

It was directed by Chuck Jones and famed layout artist Maurice Noble. It won the Academy Award in 1965, the year it was released. Incidentally, Juster's other famous book that Chuck adapted for animation was The Phantom Tollbooth.

This original production cel of the Dot and the Line has also been SIGNED by Chuck Jones. Chuck Jones once called production cels, "a gift of time" as they represent an actual moment (moment, by the way, is a heartbeat) in history. It is a 12-field cel which measures 10.5" x 12.5".

As with most cels, it is gouache on acetate and has a photo-reproduction background. NOTE: The Charles Scott Gallery is a Linda Jones Enterprise Preferred Gallery, so your artwork is direct from the company started by Chuck and his daughter and will come with a LJE COA. You can't get better provenance.

I spent all of that time educating myself about the fields of items that I collect and have become an expert in animation art as well as various paper collectibles/antiques. That three decades of collecting was the genesis of our gallery - a gallery that now has tens of thousands of items to offer you. WE ARE FANATICAL ABOUT PACKAGING. So far we've never had an item arrived damaged.

WE RECYCLE FOR THE ENVIRONMENT - so you may find everything from wrapping paper to plastic shopping bags as your packing material. WE NEVER compromise on the safety or cleanliness of your item, so rest assured we WILL get it to you in the shape it left us. The item "1965 Chuck Jones Signed Production Animation Cell Dot and the Line Oscar Winner" is in sale since Sunday, March 24, 2019. This item is in the category "Collectibles\Animation Art & Characters\Animation Art\Production Art".