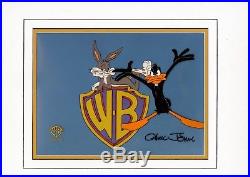 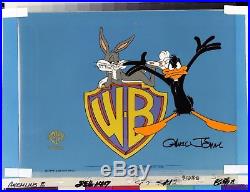 Original Production Cel of Bugs Bunny and Daffy Duck celebrating the Warner Bros. In a career spanning over 60 years, Jones made more than 300 animated films, winning three Oscars as director and in 1996 an honorary Oscar for Lifetime Achievement. Among the many awards and recognitions, one of those most valued was the honorary life membership from the Directors Guild of America. During the Golden Age of animation Jones helped bring to life many of Warner Bros. Most famous charactersBugs Bunny, Daffy Duck, Elmer Fudd and Porky Pig. The list of characters he created himself includes Road Runner, Wile E.

Coyote, Marvin Martian, Pepe le Pew, Michigan J. He also produced, directed and wrote the screenplays for Dr. Seuss How the Grinch Stole Christmas, a television classic, as well as the feature-length film The Phantom Tollbooth. In addition, Jones was a prolific artist whose work has been exhibited at galleries and museums worldwide. The item "Bugs Bunny & Daffy Duck Warner Bros.

Cel Signed Chuck Jones" is in sale since Monday, January 21, 2019. This item is in the category "Collectibles\Animation Art & Characters\Animation Art\Production Art".

The seller is "animazingsales" and is located in New York, New York. This item can be shipped worldwide.