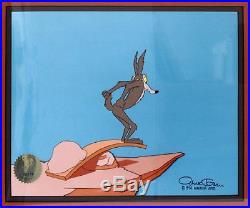 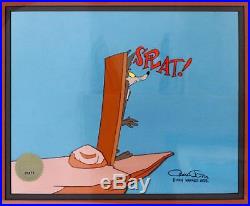 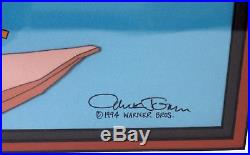 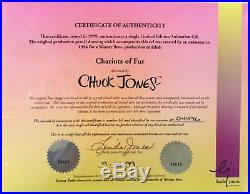 Image Size: 10.6 x 12.6 each. Framed size: H 19'' x W 33'. A rare and much sought after hand inked and hand painted pair of production cels used in the actual filming of Academy Award winning director. Wile attempts to see-saw his way over to his rival with a rock and board. However, when the rock lands on the other side, it causes the board to smash into the coyote.

The item "CHARIOTS OF FUR 1994 Two Original Production Cels BOTH Signed by Chuck Jones" is in sale since Tuesday, December 12, 2017. This item is in the category "Collectibles\Animation Art & Characters\Animation Art\Production Art". The seller is "investorcollectibles" and is located in New York, New York.