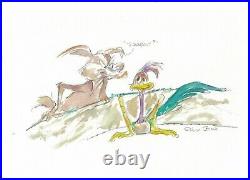 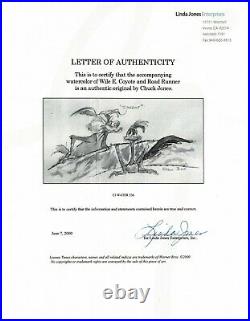 It is of course by the hand of the legendary Warner Brothers/Looney Tunes director Chuck Jones. It is an original watercolor that has been painted and then signed by Mr. Jones in pencil along with the wonderful dialogue, Turnabout?

Coming from the ever-beleaguered Wile E Coyote upon catching The Roadrunner unawares. It has a beautiful deckled edge on all sides and measures 14 3//4" x 10.5". It comes with a Letter of Authenticity signed by Mr. On the one hand, Chuck Jones needs no introduction, on the other hand, it's incredibly impressive to see a few of his accomplishments laid out in one paragraph. He is of course one of the legendary directors of the classic Looney Tunes shorts from Warner Brothers that feature iconic characters like Bugs Bunny, Daffy Duck, Wile E Coyote, Yosemite Sam and more.

He directed many of the WWII Private Snafu shorts, then left WB in 1962 to start his own company where he made a new series of "Tom and Jerry" shorts. His company also made the classic Dr.

Seuss' How the Grinch Stole Christmas! - Chuck personally convinced Dr Seuss to let his book be turned into an animated cartoon.

His company went on to make many other animated classics like The Phantom Tollbooth, Rikki Tikki Tavi and later, Mrs. Along the way he won three Academy Awards, eventually also picking up a Lifetime Achievement Oscar. In 1994, one of his most acclaimed WB shorts, What's Opera, Doc?

With Bugs Bunny and Elmer Fudd was voted the greatest cartoon of all time. And in 1999 he founded the non-profit Chuck Jones Center for Creativity.

He even has a star on the Hollywood walk of fame! Animation Art was meant to be used for production of a show or feature and it was handled as such during the production - it was not meant to be kept pristine for collectors. So there may be flaws.

If you'd like pristine artwork, please look at our wonderful Limited Editions. They are meant to be perfect poses of your favorite characters in new condition. WE ARE FANATICAL ABOUT PACKAGING. We've had items survive floods, storms and more. WE RECYCLE FOR THE ENVIRONMENT - so you may find everything from wrapping paper to plastic shopping bags as your packing material. WE NEVER compromise on the safety or cleanliness of your item, so rest assured we WILL get it to you in the shape it left us. This item is in the category "Collectibles\Animation Art & Merchandise\Animation Art". The seller is "charlesscottgallery" and is located in this country: US. This item can be shipped to United States.