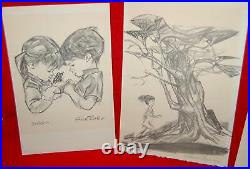 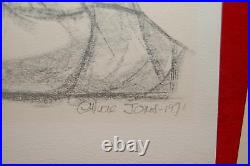 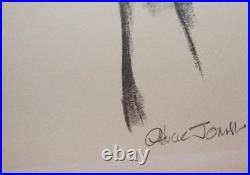 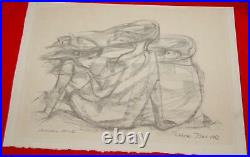 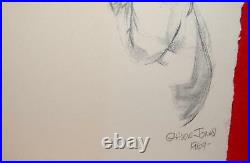 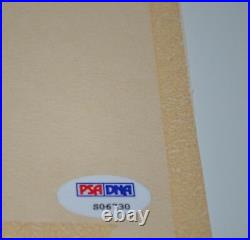 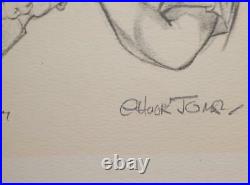 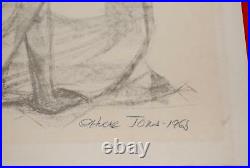 PSA Certified, ready to collect. 6 vintage, Family owned, Chuck Jones Dated / signed all have been PSA-DNA Certified. Sale includes certifications with autographs Life Drawings Collectables Art, all but two (2) are dated and signed (2) are signed and not dated. The lot is 12 pieces counting each PSA certification letter and picture as shown. 6 "life drawings" as Old Town, San Diego called them, by the late Mr.

I had them ALL PSA/DNA Certified. In checking with the studio in San Diego I learned that they are called "life drawings" they reflect aspects of life along with the stages. (4) Four of them are dated and signed, (2) Two of them not dated but signed.

6 3/4 x 9 1/2 fringed parchment art w/ preserved. They come to you ready to be framed as your taste requires. They were once framed but are now placed in an artist archival portfolio paper acid free they are form the 60's and 70. As dates show, some years ago and yet still have such meaning. The parchment - content paper which is very normal off yellow-beige in use for the age of the drawings 60's etc.

Drawing or paper are "not considered frail" at all, they are fine. The paper has a very slight color change but goes with the original parchment.

There has been very careful care taken with this set. The drawings are beautiful depicting their meaning and the Artist. I did have them previously framed by Aaron Brothers, the backs of some show the area of past framing at one time and as shown in scan above.

The drawings have no bends, tears or folds. They have the one side as shown in the scans as a tattered look this is exactly what you get when you use the drawing tablet. Signature autographs are PSA certified along with crisp and clear CERT. I'm the original owner. These scans do not do these drawings justice, in person they are fantastic in the feeling they portray and once matted and framed will be even more beautiful.

I did take them to San Diego- Chuck Jones art studio- old town as stated earlier (chuck jones) for a visual appraisal only and I'm asking lower than I was told in the verbal estimate only, that's before each one was PSA-DNA as the 60's 70's artist Mr. Jones is the driving force in these drawings, and that along with each drawing being PSA-DNA certified is just igniting. There is a serial numbered PSA-DNA sticker on the back of every one, it cannot be removed without destruction of the piece or the CERT number. They are registered with PSA-DNA which drives there value up even more.

Each one comes with a single document of PSA-DNA matching the picture on the Document from PSA and number exactly all 6 were examined and certified. Certification sheets also show a photo on it of the drawing itself, that is also depicted in the scans of what the PSA-DNA document you will receive actually looks like. S animation and drawings, creating beloved characters like Marvin the Martian, Bugs Bunny, the Road Runner, and Pepe le Pew along the way.

He was also a friend of Theodor Seuss Geisel and worked closely on. Seuss' How the Grinch Stole Christmas. Writing the screenplay as well as producing and directing the film. Stopped animation production in 1962 (a hiatus that would last 18 years) Jones opened his own company and remained active in the arts until 2002 when he passed away due to heart failure at the age of 89.

His work continues to be enjoyed by generations, and the Smithsonian's National Film Registry has included three of his cartoons on its list of the most important films of the 20th century. These are a beautiful piece of history and can not to be duplicated there will never be another fantastic Mr.

Chuck Jones - did not know "all" of Mr. Jones friends, so do not know if there are any more out there, I doubt it very much, especially signed and dated as such. I have not been able to locate any even when discussing with the Chuck Jones studio in Old Town San Diego they were un-aware of any at that time I spoke to them, he did some of his drawing for Friends also, but not too many. Having the collection PSA / DNA shows of greater value.

They are out of frames now as PSA only will certify out of frames. The red back ground gives a hue, if you look at them individually the colors is even sharper.

Also again please contact me for additional photos. Thank you for visiting and letting me share my real special collectables with you Most all of the items you see are rarities and just cannot be replaced. I have done my best to show the true color and condition with the photographs and descriptions of the items you are purchasing.

PLEASE ask if you have any questions. The photographs have not been digitally altered. Some colors of an image can vary slightly from one computer monitor to another but certainly not by much. Each drawing comes to you in acid free pages. Be sure to add me to your. 3 inch, 3 ring, binders in all sports. New 2009 Lincoln penny's. 9 and 4 pocket collectors book-great for taking to a game. Beckett (BGS) SGC or PSA graded cards.

Graded and un-graded sports in most all category's. Factory hobby boxes - of - baseball - hockey.

There are always more sports related items being added weekly. This item is in the category "Collectibles\Animation Art & Merchandise\Animation Art". The seller is "rockyschoice" and is located in this country: US. This item can be shipped to United States.