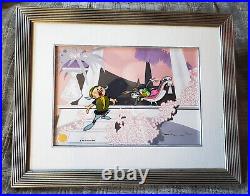 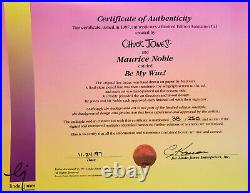 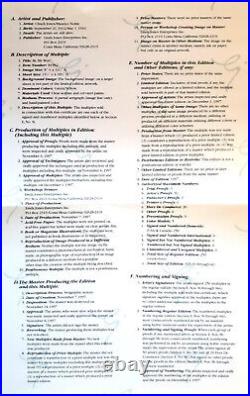 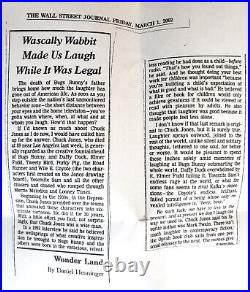 Considered to be one of Warner Brothers Studio's bestcartoon shorts ever, What's Opera Doc (1957) parodies Richard Wagner'soperatic cycle, The Ring of the Nibelung, in a brilliant seven-minutecartoon. With Elmer Fudd singing Bwunhilde, be my wuv! To a wigwearing Bugs Bunny, the cartoon was hilarious, and the Maurice Noblebackgrounds made it visually stunning. In 1992, the United States Library of Congress. Deemed it "culturally, historically, or aesthetically significant", and selected it for preservationin the National Film Registry. Making it the firstshort cartoon to receive such honors. In1994, What's Opera, Doc? 1 in a list of The 50 Greatest Cartoons. Thelist was conducted via survey by a thousand animators. This limited edition Fine Art cel and is signed by bothChuck Jones (1912 - 2002) and Maurice Nobel (1911 - 2001). The hand-painted 16field cel on a lithograph background is in a 29" x 23" frame underPlexiglas with a mat opening of 19" x 12.5". Includes Certificate of Authenticity by Linda Jones Enterprises, and Wall Street Journal article on the life and death of Chuck Jones. This item is in the category "Collectibles\Animation Art & Merchandise\Animation Art". The seller is "a-us533" and is located in this country: US.