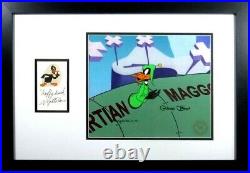 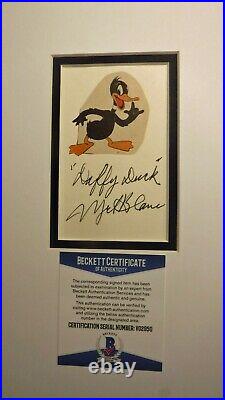 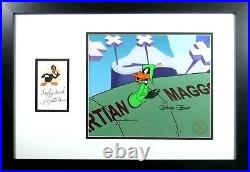 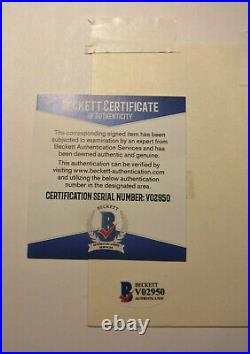 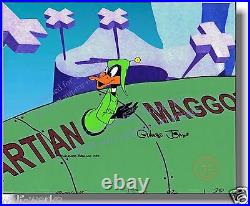 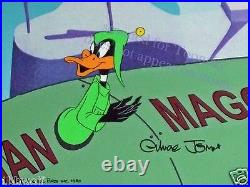 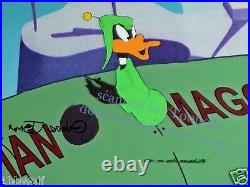 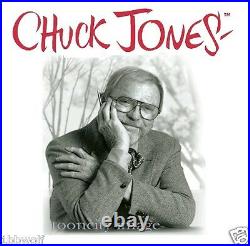 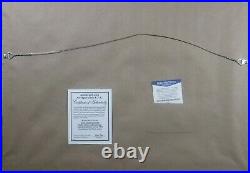 Hand Signed Production Cel of Daffy Duck from Warner Bros. " Duck Dodgers and the Return of the 24½ " from 1980 Custom Famed with a Mel Blanc Autograph.

One can freeze-frame the DVD on this exact image. Created in 1980 and copyrighted by Warner Bros. Cel size is 12.5 x 10.5 inches, with Daffy wearing his Duck Dodgers Space Outfit. Almost centered and measuring 4.5 x 3 inches in size.

Image features an older image of Daffy from the 1930s. Custom matting with double apertures. Frame size is 23 x16 inches. COA's attached to the back. Piece is ready to hang out of the box.

Includes: The LINDA JONES ENTERPRISES. Seal Embossed onto the cel.

(1957), Duck Amuck (1952) (both later inducted into the National Film Registry) and The Jones' famous "Hunter's Trilogy" of Rabbit Fire, Rabbit Seasoning, and Duck! (19511953), establishing himself as an important innovator and storyteller. Jones, like the rest of his Termite Terrace associates after the departure of Schlesinger, has been criticized for using repetitive plots, most obvious in the Pepé Le Pew and Road Runner cartoons.