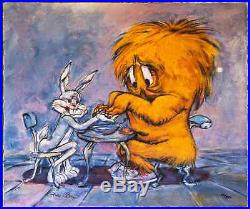 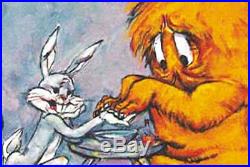 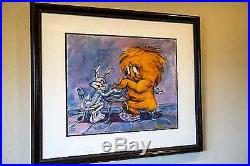 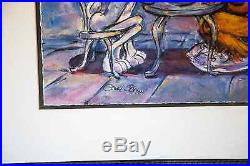 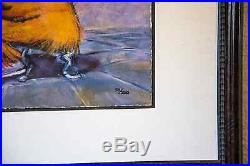 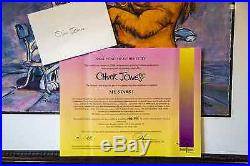 "My Stars" The perfect gift for a lover of Bugs Bunny, Gossamer (Hairy-Monster) or Chuck Jones animation. This is a limited edition Giclee (58 out of 250) signed by Chuck Jones, includes Certificate of Authenticity PLUS a rare separate signature card from Chuck Jones signed in 1999.

Framed size is 28x24x1 inches Since his death in 2002, the price of signed Chuck Jones art has continued to climb. There is no doubt this collectible will continue to add value. The piece has all the depth, texture and color of an oil painting, but the life and UV protection of a Giclee. Originally voiced by Mel Blanc, animator Chuck Jones introduced the monster character in the 1946 cartoon Hair-Raising Hare. In it, Bugs Bunny is lured to the lair of a mad scientist (who resembles Peter Lorre) as food for Gossamer. The monster (Gossamer) serves as the scientist's henchman. Part of this plot was repeated in the 1952 Jones cartoon Water, Water Every Hare, in which the monster's character is referred to as "Rudolph". The mad scientist, in need of a live brain for his giant robot, releases Rudolph from his chamber on a mission to capture Bugs Bunny; Rudolph shows a sudden burst of joyousness and quickly sets out when the mad scientist promises the reward of "spider goulash" for capturing the rabbit. The monster next appears in Duck Dodgers and the Return of the 24½th Century in 1980.

This is the first cartoon where the character is called "Gossamer", and is so named by Marvin the Martian. Jones gave the monster this name because he's the opposite looking of gossamer. He's a big, hairy thing. He has gone on to make appearances in many modern Warner Brothers or Looney Tunes movies and specials.