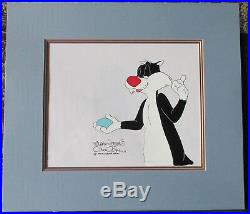 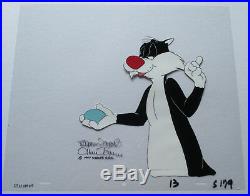 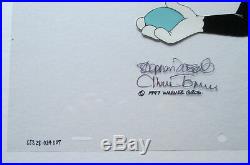 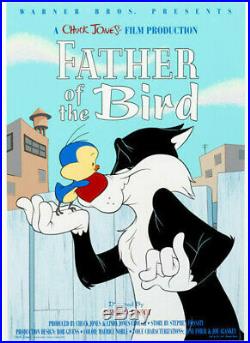 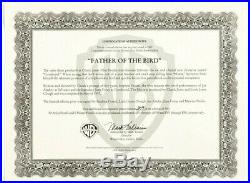 Chuck Jones and Stephen Fossatti. This was the last of the cartoons to come out of the great Chuck Jones. It was produced by Mr.

Cel Matted in an acid-free, 4-ply paper mat that measures 11" x 14". Stephen Fossatti is the only living protege, of legendary animation director Chuck Jones. Fossatti was personally mentored by Jones over a nearly ten year association, begin with Mrs.

Father of the Bird is a 1997 Looney Tunes short produced by Chuck Jones and directed by Stephen Fossati. In it, Sylvester somehow finds himself protecting a baby bird (named Cornbread) through a series of near-disasters. The print is hand-signed at the bottom by Mr. Fossati, voice artists June Foray (1917 - 2017) and Joe Alaskey (1952 - 2016), musician Cameron Patrick, color consultant Maurice Noble, and co-producer Linda Jones.