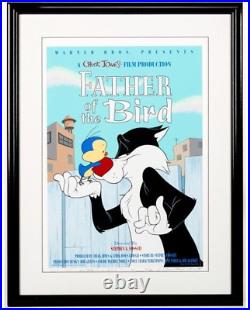 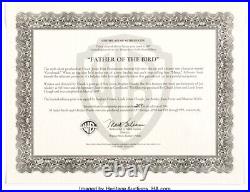 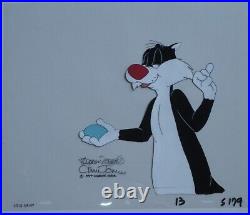 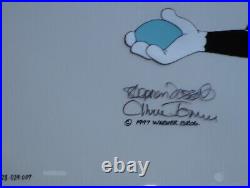 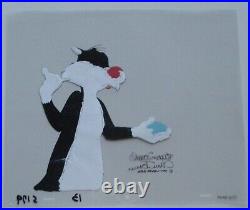 Cel and Print are in Excellent Condition. "Father of the Bird" Original Hand Painted Production Cel and Sylvester and Cornbread Limited Edition Fine Art Print #209/500 (Warner Brothers, 1997). Father of the Bird is a 1997 Looney Tunes short produced by Chuck Jones and directed by Stephen Fossati. In it, Sylvester somehow finds himself protecting a baby bird (named Cornbread) through a series of near-disasters. The print is hand-signed at the bottom by Mr. Fossati, voice artists June Foray (1917 - 2017) and Joe Alaskey (1952 - 2016), musician Cameron Patrick, color consultant Maurice Noble, and co-producer Linda Jones. It's matted with an opening of 18.5" x 26.25", and framed using Plexiglas for an overall size of 34.5" x 26.5". A Warners COA is included.

Cel and print condition is Fine. This item is in the category "Collectibles\Animation Art & Merchandise\Animation Art". The seller is "ocher2007" and is located in this country: US. This item can be shipped to United States.