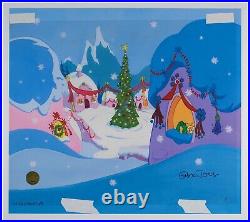 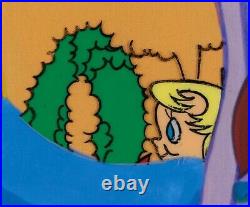 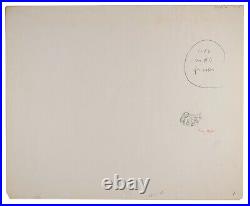 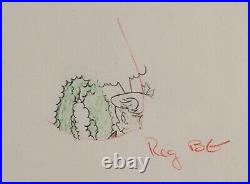 2021 became the 55th Anniversary of "HOW THE GRINCH STOLE CHRISTMAS"... These cels will continue to rise in value...

Only a few remain in the world in good condition. HOW THE GRINCH STOLE CHRISTMAS. Signed by director Chuck Jones , and bear a numbered holographic seal of authenticity. MGM Studios, 1966 Original production cel and drawing of Cindy-Lou Who from How the Grinch Stole Christmas! Which depicts the pint-sized toddler holding a wreath inside her snow-covered Whoville house.

The character image measures 1.5 x 1, and the cel, which is signed by legendary cartoonist Chuck Jones, is placed on a studio copy background measuring 18 x 16. The piece has the gold Linda Jones Enterprises seal to lower left. Included with the cel is the original matching production drawing of Cindy-Lou Who, accomplished in graphite and colored pencil on untrimmed 16.5 x 13.5 animation paper. Accompanied by a letter of authenticity from Linda Jones Enterprises. THERE ARE VERY FEW ORIGINAL GRINCH CELS AVAILABLE.

Comes unframed with a Letter of Authenticity from Linda Jones. Measures unframed 19" x 16". This is a beautiful cel. We do not mark merchandise values below value or mark items as "gifts" - US and International government regulations prohibit such behavior. Feel free to ask questions... Also check out our inventory as we will be adding some great, RARE pieces to the store!

The seller is "koolectibletoons" and is located in New Haven, Connecticut. This item can be shipped to United States.