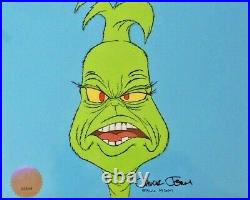 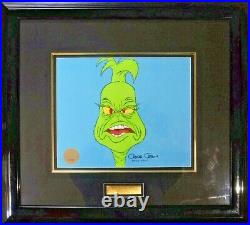 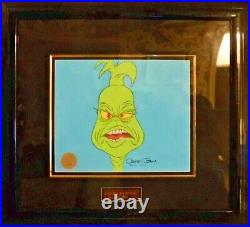 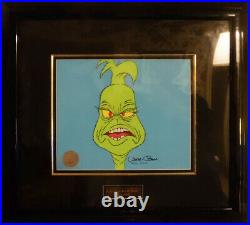 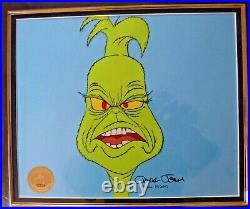 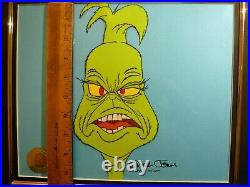 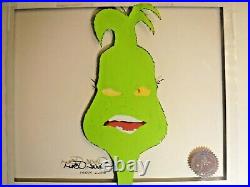 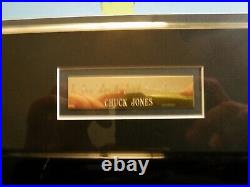 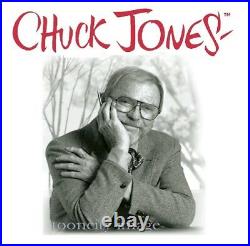 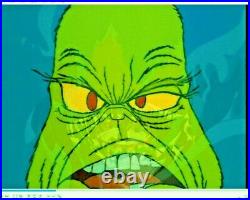 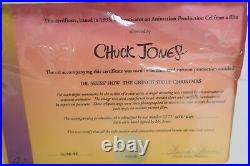 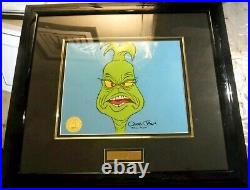 Suess' How the Grinch Stole Christmas Production Cel Setup MGM, 1966, hand signed by Chuck Jones himself. He's looking into the camera and complaining about the Who's and all the Noise they make. 9 1/2 x 11 1/4. Cel is from the scene in which, The Grinch is talking into the camera, complaining about Christmas and how The Whos celebrate the holiday.

And then, they'll do something I hate most of all.... proclaims the cantankerous Grinch as he describes the Whos singing their holiday songs. Frame is used and in poor condition and needs to be replaced. Matting is in great condition as is the cel. Includes Certificate of Authenticity cel identification number CJ 75-072-009, from Barker Animation Art, Linda Jones Enterprises, Inc.

He wrote, produced, and/or directed many classic animated cartoon shorts starring Bugs Bunny, Daffy Duck, Wile E. Coyote and the Road Runner, Pepé Le Pew, Porky Pig, Michigan J. Frog, the Three Bears, and a slew of other Warner characters. After his career at Warner Bros. Ended in 1962, Jones started Sib Tower 12 Productions, and began producing cartoons for Metro-Goldwyn-Mayer, including a new series of Tom and Jerry shorts and the television adaptation of Dr. Seuss' How the Grinch Stole Christmas!

He later started his own studio, Chuck Jones Enterprises, which created several one-shot specials, and periodically worked on Looney Tunes related works. Jones was nominated for an Oscar eight times and won three times, receiving awards for the cartoons For Scent-imental Reasons, So Much for So Little, and The Dot and the Line. He received an Honorary Academy Award in 1996 for his work in the animation industry.

Film historian Leonard Maltin has praised Jones' work at Warner Bros. MGM and Chuck Jones Enterprises. He also said that the "feud" that there may have been between Jones and colleague Bob Clampett was mainly because they were so different from each other. In Jerry Beck's The 50 Greatest Cartoons, ten of the entries were directed by Jones, with four out of the five top cartoons (including first place) being Jones shorts. The item "Grinch Who Stole Christmas hand Painted production Cel signed Chuck Jones 1966" is in sale since Thursday, December 24, 2020.