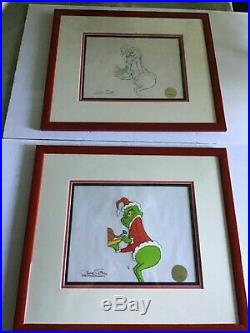 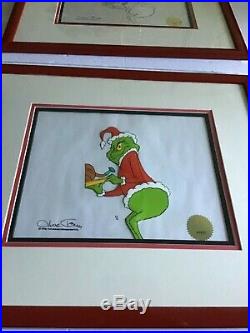 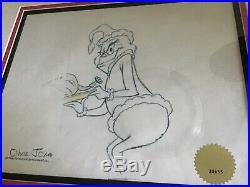 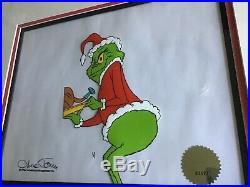 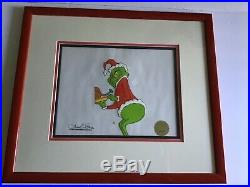 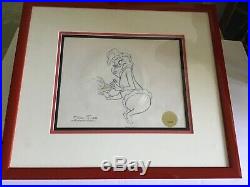 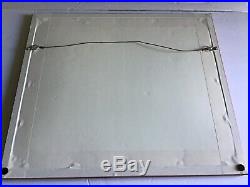 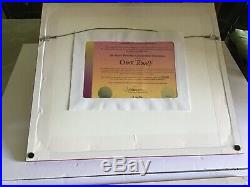 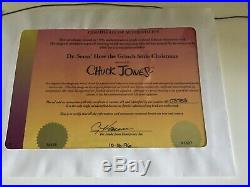 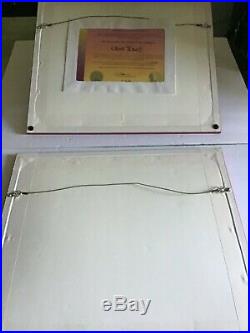 "DR SEUSS'S HOW THE GRINCH STOLE CHRISTMAS"Animated Sequence by Chuck Jones Turner Entertainment 1966. Single Limited Edition Animation Cel AND Original Production Pencil Drawing Includes: BOTH Cel and Drawing Signed by CHUCK JONES Picture/Cel sizes 12" x 10" and the frames are approx 17.5" x 20"Beautiful Red Frame with Triple Matting. Chuck Jones (September 21, 1912 - February 22, 2002) was born in Spokane, Washington but grew up in Hollywood, California where he was inspired by the comedic talents and slapstick humor of Charlie Chaplin and Buster Keaton.

Jones graduated from Chouinard Art Institute in Los Angeles (now California Institute of the Arts). In 1932, Jones got his first job as a cel washer for Ubbe Iwerks, a former Disney Animator. , after being hired by Friz Freleng as an animator. Once the animation branch of Warner Bros. Closed, Jones briefly worked for Disney before moving to MGM where he created new episodes of Tom and Jerry and directed features such as The Dot and the Line, which went on to win an Academy Award for Animated Short Film. The item "GRINCH WithTURKEY CHUCK JONES SIGNED ANIMATION CEL AND DRAWING" is in sale since Saturday, November 30, 2019. This item is in the category "Collectibles\Animation Art & Characters\Animation Art\Limited Editions". The seller is "phoenixtugaz" and is located in Phoenix, Arizona. This item can be shipped to United States.