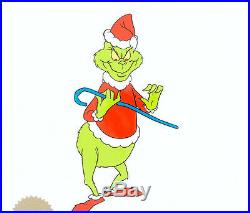 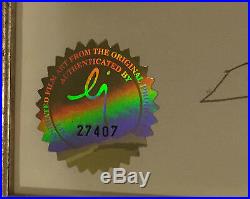 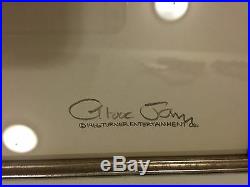 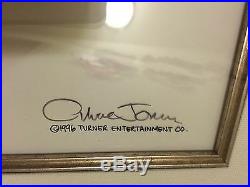 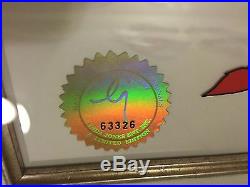 Seuss and Chuck Jones animated classic from 1966: How the Grinch Stole Christmas. And this is an AMAZING piece of art - well actually TWO pieces of SIGNED art of the Grinch in his Santa suit, holding the cane he uses as a pool cue! Back in the day when the Linda Jones gallery and the Warner Brothers galleries were in full swing, Chuck Jones wanted to create some truly spectacular offerings. So he took a few of his original production 1966 drawings (used under-the-camera in 1966), and created hand-painted, 1 of 1 limited edition cels from these drawings and framed and matted those together with the original drawings (this 1 of 1 cel was created in 1996)!

To be clear here: the drawing is an original production drawing from 1966, signed by Chuck Jones and with the Linda Jones seal. The cel is a MATCHING, hand-painted limited edition of ONE and only ONE from 1996 and signed by Chuck Jones with the Linda Jones seal. Both matted and framed together for a truly unique offering. The overall frame measures approximately 33 1/4" x 17 1/4" and the Grinch stands almost 7 tall in each aperture. The art is in great condition - minor scuffing or marks on the plexi or frame.

We'll include a Charles Scott Gallery COA. And we will send your items in 1 box. As the owner, I have personally been a collector of collections for over three decades.

I spent that time educating myself about the fields of items that I collected and have become an expert in animation art as well as various paper collectibles/antiques, pottery, electronics, etc. That three decades of collecting was the genesis of our gallery - a gallery that now has tens of thousands of items.

WE ARE FANATICAL ABOUT PACKAGING. So far we've never had an item arrived damaged. WE RECYCLE FOR THE ENVIRONMENT - so you may find everything from wrapping paper to plastic shopping bags as your packing material. WE NEVER compromise on the safety or cleanliness of your item, so rest assured we WILL get it to you in the shape it left us. The item "HOW THE GRINCH STOLE CHRISTMAS 1966 Chuck Jones Seuss signed cell and draw seal" is in sale since Sunday, March 24, 2019.