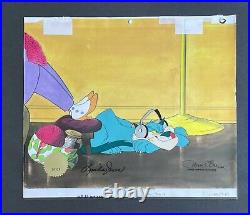 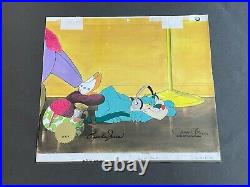 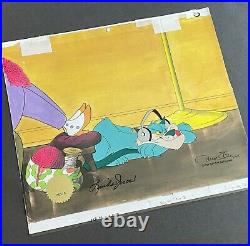 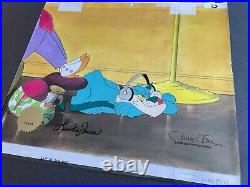 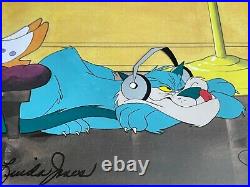 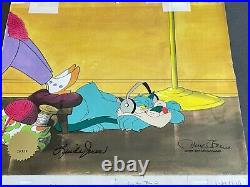 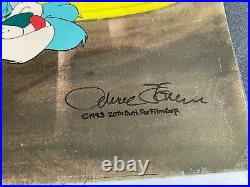 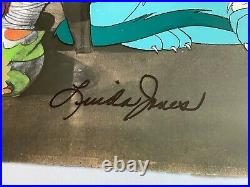 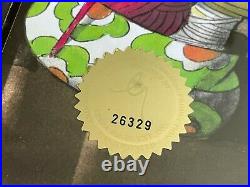 This listing is for an original production cel and laser copy background of Grunge the cat from (1993) Mrs Doubtfire. Item is in good condition with standard wear from production and storage. It was bought directly from the Chuck Jones gallery roughly 20 years ago. The cel is signed by Chuck Jones and also includes the gallery seal and a. Signature by Chuck Jones daughter, Linda Jones Clough.

This cel is from an alternate scene deleted from the opening of Mrs Doubtfire. In the released version, Robin Williams character (Daniel Hillard) is seen recording the voices live for both characters Pudgy Parakeet & Grunge the cat. This animation was never publicly shown until it was included several years afterward as a bonus feature on the Mrs. The full 5-minute deleted version of the cartoon can also be viewed on YouTube. Fun fact : Apparently, Chuck Jones wasn't too keen on the backgrounds, feeling that they were overly detailed.

So, Jones had the cartoon completely reshot with new backgrounds that reflected a more subdued graphic style. We've included matching screenshots of this cel featuring both filmed backgrounds. Troubled that he has little access to his children, divorced Daniel Hillard (Robin Williams) hatches an elaborate plan. With help from his creative brother Frank (Harvey Fierstein), he dresses as an older British woman and convinces his ex-wife, Miranda (Sally Field), to hire him as a nanny.

Doubtfire wins over the children and helps Daniel become a better parent, but when both Daniel and his nanny persona must meet different parties at the same restaurant, his secrets may be exposed. Check out our other listings for similar items! This item is in the category "Collectibles\Animation Art & Merchandise\Animation Art". The seller is "homers0dyssey" and is located in this country: US.