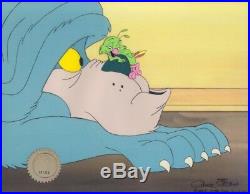 Direct from Chuck Jones/Linda Jones Enterprises. Complete with a Linda Jones Enterprises Seal and COA. This year is the 25th anniversary of Mrs Doubtfire, starring Robin Williams and animated by Chuck Jones and an A-list of animators See article excerpt below and link to article AND clips! We've received a small but WONDERFUL grouping of cels direct from Linda / Chuck Jones enterprises. This cel is SIGNED by Chuck Jones, has a color print background and comes with a Linda Jones Seal and COA! This year marks the 20th anniversary of Chris Columbus comedy Mrs. In the opening of the film, Robin Williams plays a voice-over artist who is recording lines for a cartoon that has already been made. (Yes, thats out of order for a standard cartoon production, but for entertainments sake, well let it slide).

The cartoon was supervised by legendary Warner Bros. Director Chuck Jones, and animated by a small team of A-list animators that included legends like Bill Littlejohn and Tom Ray, and younger animators like Eric Goldberg. Coincidentally, Goldberg was also animating to the voice of Robin Williams for another animated project around the same periodthe Genie in Aladdin. In the film, we see barely a minutes worth of animation of the two main charactersPudgy Parakeet and Grunge the Cat.

But in reality, Chuck Jones and his crew animated five minutes of material. This was never publicly shown until it was included several years afterward as a bonus feature on the Mrs. NOTE: The Charles Scott Gallery is a Linda Jones Enterprise Preferred Gallery, so your artwork is direct from the company started by Chuck and his daughter and will come with a LJE COA.

You can't get better provenance. And we will send your items in 1 box. As the owner, I have personally been a collector of collections for over three decades. I spent that time educating myself about the fields of items that I collected and have become an expert in animation art as well as various paper collectibles/antiques, pottery, electronics, etc. That three decades of collecting was the genesis of our gallery - a gallery that now has tens of thousands of items.

WE ARE FANATICAL ABOUT PACKAGING. So far we've never had an item arrived damaged. WE RECYCLE FOR THE ENVIRONMENT - so you may find everything from wrapping paper to plastic shopping bags as your packing material. WE NEVER compromise on the safety or cleanliness of your item, so rest assured we WILL get it to you in the shape it left us. The item "Mrs Doubtfire CHUCK JONES signed 1993 Original Production Cel COA and Seal" is in sale since Wednesday, March 20, 2019.