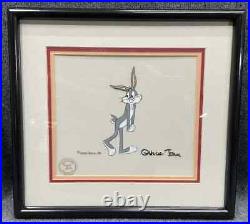 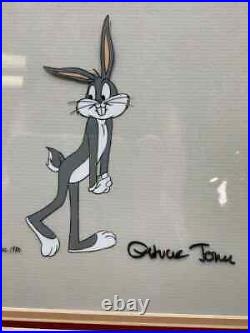 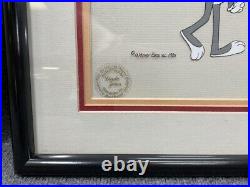 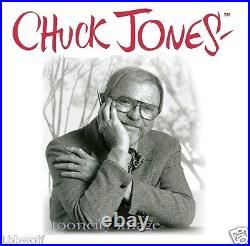 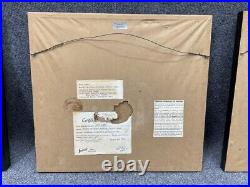 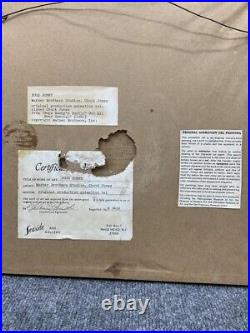 " Bugs Bunny Bustin' Out All Over " CA 1980. A great image of Bugs Bunny. This hand Painted Production cel is a One-of-a kind piece. Piece includes the Linda Jones Official Seal.

Production cels are actual images that are photograph for a film or short. One can freeze-frame the DVD on this exact image. Created in 1980 and copyrighted by Warner Bros. Cel size is 12.5 x 10.5 inches, with. Bugs is almost centered and measuring 6 x 3 inches in size.

(1957), Duck Amuck (1952) (both later inducted into the National Film Registry) and The Jones' famous "Hunter's Trilogy" of Rabbit Fire, Rabbit Seasoning, and Duck! Jones, like the rest of his Termite Terrace associates after the departure of Schlesinger, has been criticized for using repetitive plots, most obvious in the Pepé Le Pew and Road Runner cartoons. It must be noted, however, that many of these films were originally issued to theaters years apart, and the repetitious factor was often done at the request of the producers, management, or theater owners.

Also, series like the Road Runner were set up as exercises in exploring the same situation in different ways. Jones had a set list of rules as to what could and could not occur in a Road Runner cartoon, and stated that it was not what happened that was important in the films, but how it happened.

This item is in the category "Collectibles\Disneyana\Contemporary (1968-Now)\Animation Art, Cels". The seller is "toon-city" and is located in this country: US.