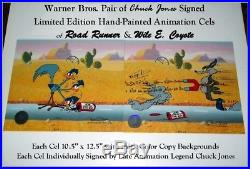 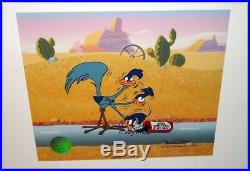 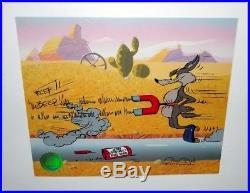 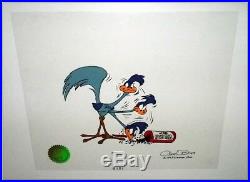 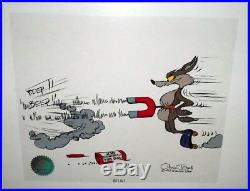 COA: Linda Jones seal bottom right of cel (last graphic is of Linda Jones). Signed: Yes, Chuck Jones (both cels). Original Hand-Inked, Hand-Painted Cels: Yes. WB Seals each cel: Yes. Coyote is a Looney Tunes character created by Chuck Jones and Michel Maltese. He debuted with his frequent adversary, Road Runner, in 1949's Fast and Furry-ous. To date, 48 cartoons have been made featuring these characters (including the computer-animated shorts), most of which were directed by Chuck Jones. In each cartoon, Wile E. Starting as a cel washer, Chuck Jones worked his way up to animator and then director at the animation division of Warner Bros. He is famous for creating such beloved cartoon characters as Wile E. Coyote, Henery Hawk, Pepé Le Pew, Marvin the Martian, Ralph Wolf, Road Runner, Sam Sheepdog, Sniffles, and many others, as well as adding to the development of Warner favorites such as Bugs Bunny, Daffy Duck, Porky Pig and countless others. His most famous cartoons tend to have been created with writer Michael Maltese. Jones' autobiography, published by Simon & Schuster "Chuck Amuck"--a pun on his Daffy Duck short Duck Amuck (1953)--gives a very amusing account of his life. It is liberally sprinkled with hundreds of cartoons with some color plates.

At 85, Chuck signed a long-term contract with Warner Bros. To supervise the animation department. His thoughts on the contract were: At 85 you can only think ahead for the next 50 years or so. His cartoons What's Opera, Doc? (1957), Duck Amuck (1953) and more recently One Froggy Evening (1955) have been accepted into the United States National Film Registry.

He was awarded a Star on the Hollywood Walk of Fame at 7011 Hollywood Boulevard in Hollywood, California on February 13, 1995. Gratefully matched same day left. NOTE: ALL of our framed cels, watercolors, signed books are. Photos are always of the actual item being auctioned. Pay for it in the evening and it goes out the next day.

The seller is "fashiontime" and is located in Uniontown, Ohio. This item can be shipped worldwide.