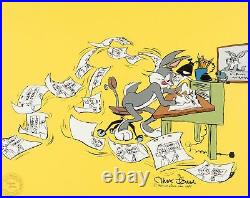 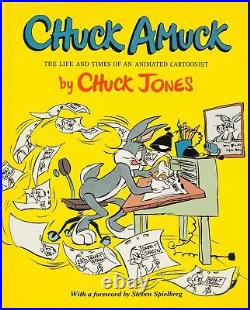 The cover art was released to animation collectors as a 16 field hand-painted limited edition cel is signed by the artist Chuck Jones (1912 - 2002). It bears a Linda Jones seal and comes with a Certificate of Authenticity from The Cricket Gallery.

Please note the number of this cel is different from the number you will receive which is #347/750. The book is not included. It is for reference for the cover picture. Was the in-house division of Warner Bros. During the Golden Age of American animation.

The Warner animation division was founded in 1933 as Leon Schlesinger Productions, an independent company which produced the popular Looney Toons and Merrie Melodies animated short subjects for release by Warner Bros. Who continued to operate it as Warner Bros. Looney Tunes and Merrie Melodies were briefly subcontracted to Freleng's DePatie-Freleng Enterprises studio from 1964 until 1967. Cartoons studio briefly re-opened in 1967 before shutting its doors for good two years later. CHUCK JONES: Starting as a cel washer, Chuck Jones worked his way up to animator and then director at the animation division of Warner Bros. He is famous for creating such beloved cartoon characters as Wile E. Coyote, Henery Hawk, Pepé Le Pew, Marvin the Martian, Ralph Wolf, Road Runner, Sam Sheepdog, Sniffles, and many others, as well as adding to the development of Warner favorites such as Bugs Bunny, Daffy Duck, Porky Pig and countless others. The item "Signed CHUCK JONES LIMITED EDITION Warners Bugs Bunny Chuck Amuck 1989 #347/750" is in sale since Saturday, March 27, 2021.

This item is in the category "Collectibles\Animation Art & Characters\Animation Art\Limited Editions". The seller is "milyjam" and is located in Alpharetta, Georgia. This item can be shipped worldwide.