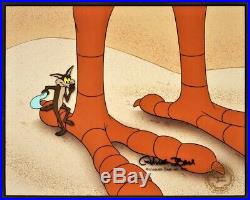 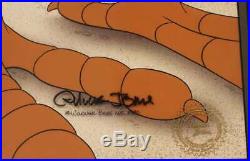 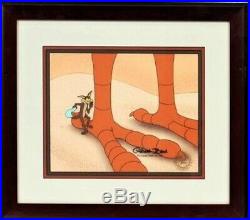 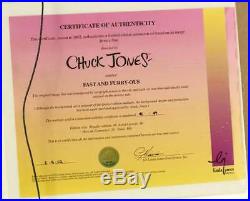 A rare and much sought-after hand inked and hand painted production cel used in the filming of director Chuck Jones 1980 Warner Bros. /Looney Tunes short from Bugs Bunnys Bustin Out All Over.

Coyote is chasing the Road Runner through a series of pipelines, which causes both to emerge in a greatly shrunken state. Upon discovering their situation, they agree to re-enter the pipeline and be transformed back into full size. The Road Runner emerges at normal size, but Wile is still in small size when he comes out. Upon discovering this turn of fortune, the Road Runner stops and allows his rival to "catch" him. The coyote doesn't notice anything until he steps over his opponent's legs and rushes back to. The coyote is ecstatic and pulls out his knife and fork to eat his opponent... Until he stares more closely at the bird's huge legs, which are twice as tall as he is, and looks up to see he is massively outgunned. The Road Runner gives his antagonist an amplified "beep-beep", causing Wile to drop his utensils in shock.

He can only hold up signs stating. "OK, wise guys - you always wanted me to catch him -" Now what do I do? The item "SOUP OR SONIC 1980 Original Production Cel Signed Chuck Jones'WILE E. COYOTE" is in sale since Thursday, November 7, 2019. This item is in the category "Collectibles\Animation Art & Characters\Animation Art\Production Art".