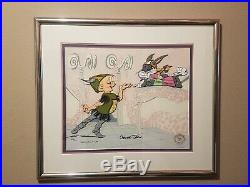 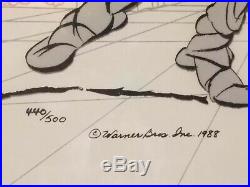 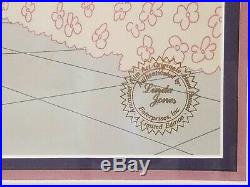 Limited Edition Animation Cel signed by Chuck Jones with stamped Authentication. Bugs Bunny & Elmer Fudd in the classic 1957 Warner Brothers cartoon, directed by Chuck Jones. Cel number 440 out of 500. The cartoon is widely regarded as Chuck Jones masterpiece, and many film critics, animation fans and filmmakers consider it to be the greatest of all the cartoons Warner Bros. It has topped many Top Ten lists of the greatest animated cartoons of all time.

In 1994, one thousand members of the animation industry ranked What's Opera, Doc? 1 in a list of the 50 greatest cartoons of all time. In 1992, the United States Library of Congress deemed it "culturally, historically, or aesthetically significant", and selected it for preservation in the National Film Registry, making it the first cartoon to receive such honors.

Duck Amuck and One Froggy Evening were later inducted into the registry, making Chuck Jones the only animator with three shorts thus recognized. The item "WHAT'S OPERA DOC Warner Brothers cel signed by Chuck Jones" is in sale since Monday, March 2, 2020. This item is in the category "Collectibles\Animation Art & Characters\Animation Characters\Warner Bros.