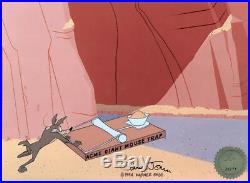 With Warner Brothers Seal and Linda Jones COA. "Chariots of Fur" from 1994 is a particularly important cartoon. It was the first time a new short of Wile E Coyote and the Road Runner had been released theatrically since 1966.

It was the final Coyote/Road Runner short to be directed by Chuck Jones. This original production cel of Wile E Coyote has also been SIGNED by Chuck Jones.

WE ARE FANATICAL ABOUT PACKAGING. So far we've never had an item arrived damaged. WE RECYCLE FOR THE ENVIRONMENT - so you may find everything from wrapping paper to plastic shopping bags as your packing material. WE NEVER compromise on the safety or cleanliness of your item, so rest assured we WILL get it to you in the shape it left us. The item "Wile E Coyote Looney Tunes Chuck Jones Signed 1994 Production Animation Cel" is in sale since Monday, October 28, 2019.