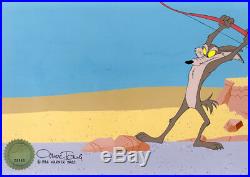 With Warner Brothers Seal and Linda Jones COA. "Chariots of Fur" from 1994 is a particularly important cartoon. It was the first time a new short of Wile E Coyote and the Road Runner had been released theatrically since 1966. It was the final Coyote/Road Runner short to be directed by Chuck Jones. This original production cel of Wile E Coyote has also been SIGNED by Chuck Jones. Chuck Jones once called production cels, "a gift of time" as they represent an actual moment (moment, by the way, is a heartbeat) in history.

It is a 12-field cel which measures 10.5" x 12.5". As with most cels, it is gouache on acetate and has a photo-reproduction background. NOTE: The Charles Scott Gallery is a Linda Jones Enterprise Preferred Gallery, so your artwork is direct from the company started by Chuck and his daughter and will come with a LJE COA.

WE ARE FANATICAL ABOUT PACKAGING. So far we've never had an item arrived damaged. WE RECYCLE FOR THE ENVIRONMENT - so you may find everything from wrapping paper to plastic shopping bags as your packing material.